Search from all products… 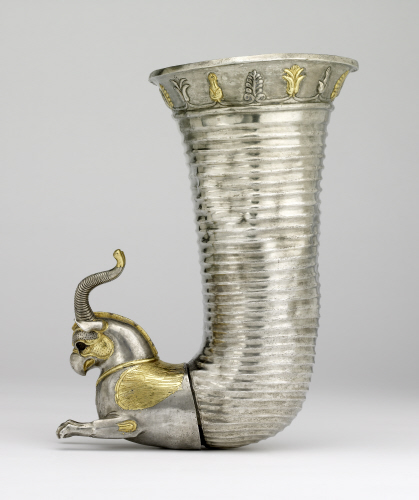 The art and culture of Iran has been famous and special throughout history and its magnificent and valuable works are at the level of world masterpieces and today it is the ornament of the great museums of the world or in the possession of collectors. A very interesting example of valuable Iranian art is Rhyton making, which has been of special importance both in prehistoric times and in historical periods. This art is not imported but the initiative of Iranians, and the surviving examples show the creative spirit and innate genius of Iranians, who have ultimately created elegance, precision, skill and mastery.

In Dehkhoda dictionary, the word Takuk is mentioned equivalent to Rhyton and it is stated that: Takuk was something golden or iron in the form of cow or fish or chicken and they drank wine with it.

In the book (Parthian Achaemenid Medo-Sassanid) it is stated:  “This is the kind of dish that the HITITs refer to as Bibrau in their historical documents.”

Saghar or Jami, which is used in Persian, is referred to in the term of archeology as Rhyton, which the Iranians made in ancient times with a special form and skill. Containers that have the ends in the shape of animal heads such as tiger, deer, deer, horse, bull, wild goat, etc. with different sizes.

Perhaps these cups were made with special shapes to the buildings and palaces where the Medes, Parthians and Persians lived. It should be consistent that the complement of the high-flying procedure made them look double, and another reason for making these cups is stated in the book (Art of Metalworking in Iran) as “The animals’ power and strengths will be transferred to them.”

It seems that this reason is more in line with the beliefs and beliefs of the Aryans, because in the construction of palaces, the use of statues of huge and extraordinary animals (griffons) GRIFFON expresses the greatness of the Aryans and also has the aspect of protecting the palace and temples.

How to make Raytheon

1) Making metal Raytheon with a hammer:

In this method, ingots or flat sheets and cold metal are made into a desirable shape by hammering or using convex molds, reminiscent of molds and other metalworking tools.

2) Making metal or clay Raytheon by casting or molding:

In this method, the model and mold of the dish were first waxed and all or part of the necessary decorations were carved or engraved on it, and then the mold was placed in a very soft clay container and poured on it. The heat of molten metal melted the wax and the dish melted. After cooling, it was paid for. To make clay Raytheons, molds were first made for the desired shapes of metal or wood, then clay was placed in molds, and after drying in the kilns, they were glazed in various colors.

The construction of Raytheon was usually inspired by nature, considering the animals that lived around them and were considered a manifestation of beauty and power. The desired shape was chosen for Raytheon. Sometimes the creative mind led to the formation of imaginary and unreal animals and brought it to the scene with the utmost care and capacity, and usually animals were selected that were superior to their peers in nature and were the manifestation of power and dominance to better power and shock. They exposed the ruling class or had a special characteristic, such as the camel, whose main characteristic is tolerance against dehydration.

Most archaeologists have discovered various forms of Raytheons in different geographical areas.

In Hamedan, most of the lion’s head and the head of the ram in Zivieh, Kurdistan and the soaring mountains of the Zagros, the head of the ram and the savage. In Kelardasht, Mazandaran, the tiger in the desert and hot and dry areas of the camel formed the Raytheon Hara design.

In the book, the Sassanid Parthian Achaemenid material, it is mentioned that different forms of Raytheons are kept in the museums of the world.

With the emergence of this type of dish in human life, it has been continuously used by the ruling class in special ceremonies, feasts, feasts and celebrations, and the prosperity of the aristocratic assembly has been.

The use of this type of utensils was used in all social classes, but their type was different. The lower classes of society used pottery Raytheons, and the upper classes used gold and silver Raytheons, and in religious ceremonies, probably more in the form of roses. The grains were used. Given that Raytheon’s mouth was wide open. By pouring perfume in it and installing it in the empty space of rooms and halls, temples, fire temples, existing space

They made it fragrant and spiritual. With the advent of Islam and due to the special beliefs of the Islamic religion, including the source of drinking wine, opposition to the portrayal of humans and animals in art, the art of Raytheon was also forgotten.